A Warning to All Americans 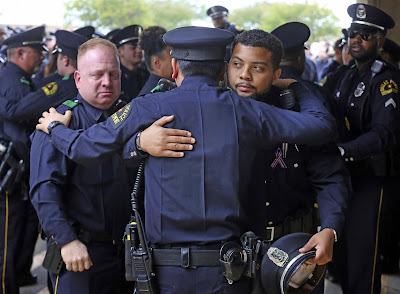 I would like to take a moment of your time to speak on a vital issue.

We are beginning to see a lot of great cops opt to retire sooner rather than later. This exodus will cause a gap in training new cops, we will not have distinguished veteran officers, mentoring and passing on their skills and knowledge to a younger generation of police officers. Police departments across the country will lose veteran investigators who are able to solve crimes, veteran community policing officers who interface with the public, especially vulnerable young people, lose veteran tactical officers who are able to contain violence before it impacts a larger segment of our population and when they leave, their skills and knowledge leave with them.

This "brain drain" will be as crippling to public safety as the brain drain during the Clinton administration crippled the military, and left us vulnerable to the attacks of 09/11/2001.  The rule of law and the support for law enforcement must be restored and maintained if our society is to survive and flourish. If it is not, chaos will descend upon us, and in that chaos we will see a rise of extra-judicial actors who will take matters into their own hands. Most likely these individuals or bands will operate without regard for the civil rights of those they believe are criminals and there will be atrocities and heinous acts of violence perpetrated on Americans, worse than the murder of George Floyd. And all of this because we allowed a mob of petulant malcontents weaken a pillar of our societal stability.

As the old adage goes "nature abhors a vacuum", and there is a vacuum being created in our justice system, one that cannot be filled with "social workers" and "community activists". Our Republic is weakened, it is up to the American people to check that weakening by exercising their God given rights, enshrined in the Constitution that our Framers placed to guard against such calamities and which we have been woefully laxed in exercising. Vote this November, vote for a return to stability and the rule of law, and not uncertainty and chaos.

God Save the Republic and God Bless America!


What if you found yourself in a survival situation and there wasn't a lighter or matched to be had.  Would your kit contain an alternative ignition system for starting a fire for warmth and cooking? Our ancestors had a remedy for that instance.

Is the rush by corporations to pledge money to #BLM more of the typical naive corporate virtue signaling or are they paying extortion money to keep their property from being destroyed? 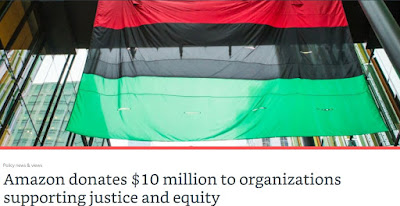 I have noticed that online presence of most major corporations are dripping with platitudes on "social justice".

All of these people who keep telling us that Black Lives Matter should stop donating to Planned Parenthood and start protesting at abortion clinics where the vast majority of Black lives are snuffed out before they even begin....

#GetWokeGoBroke
Posted by Kevin at 2:05 PM No comments: